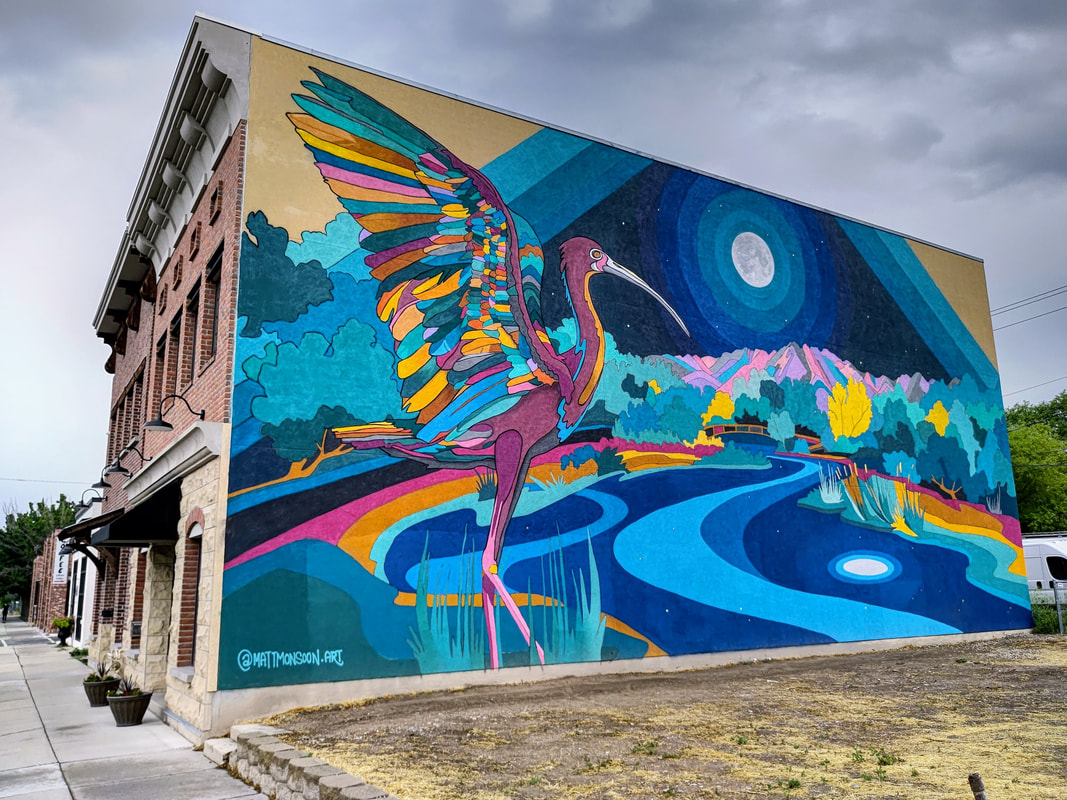 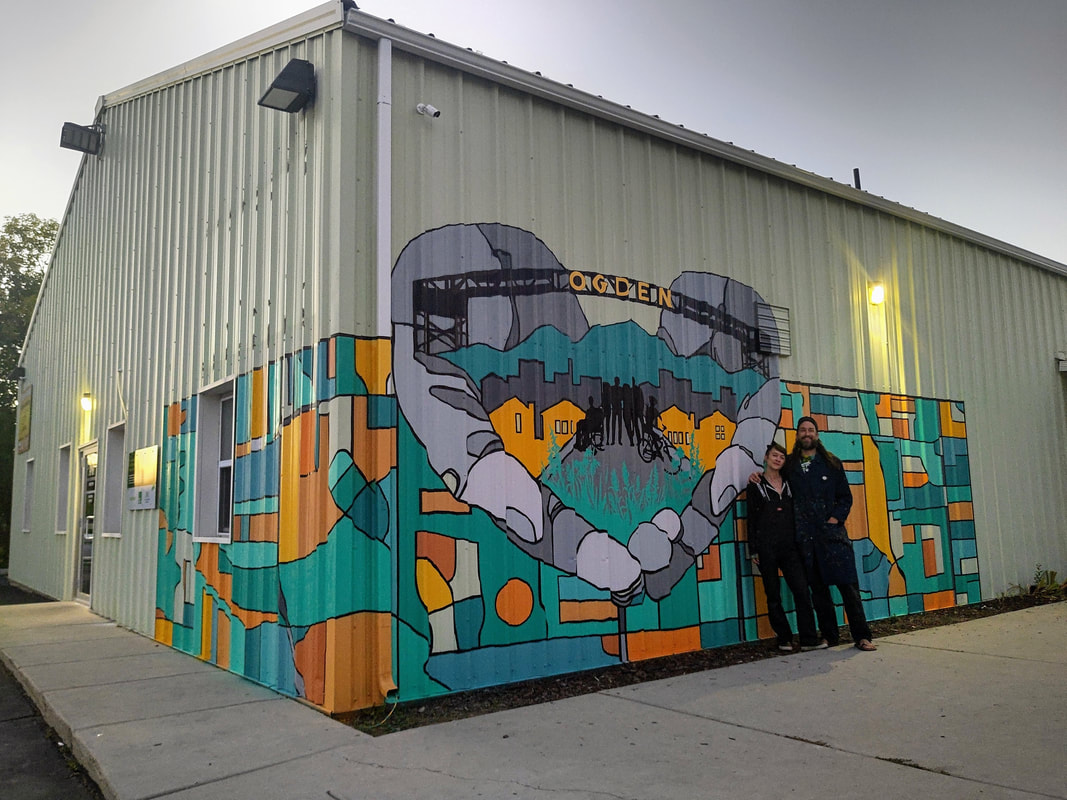 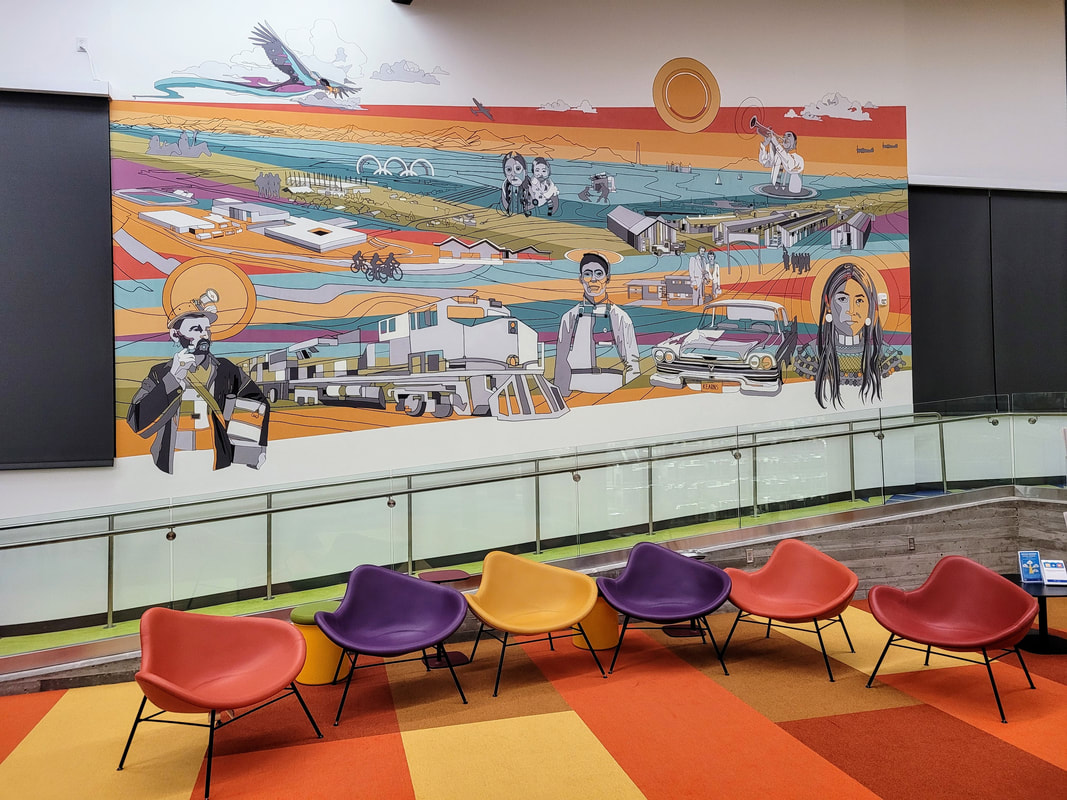 Past (Community Roots) : An interpretation of the diverse and interconnected stories, cultures, history, people, and folklore that built the community of Kearns, Utah. This mural pays tribute to some of Kearns' forgotten history and champions the stories of the hard working people who made it home.
27 x 16 feet | Kearns Public Library

Present (The Interwoven Now) : Inherited from our ancestors, and gifted to our children -  the time is now. This wall depicts the meaningful moments of connection, community, ancestry, and family - and being present to watch it all unfold.
68 x 25 feet | Kearns Public Library

Future (The Reimagining) : Overlooking Kennecott Copper Mines in a state of regrowth years in the future, this scene imagines a world and environment on the mend, and the youth discussing the vibrant possibilities that lay ahead of them.
​29 x 9 feet | Kearns Public Library 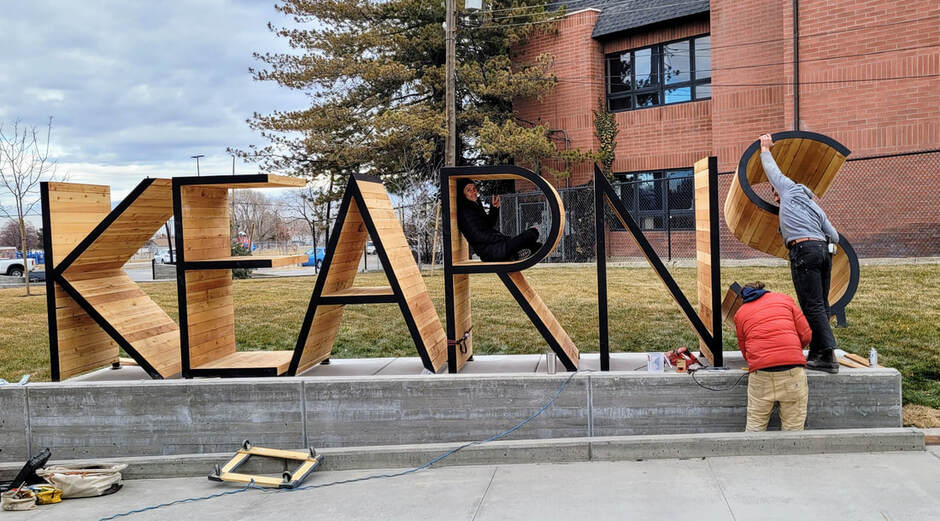 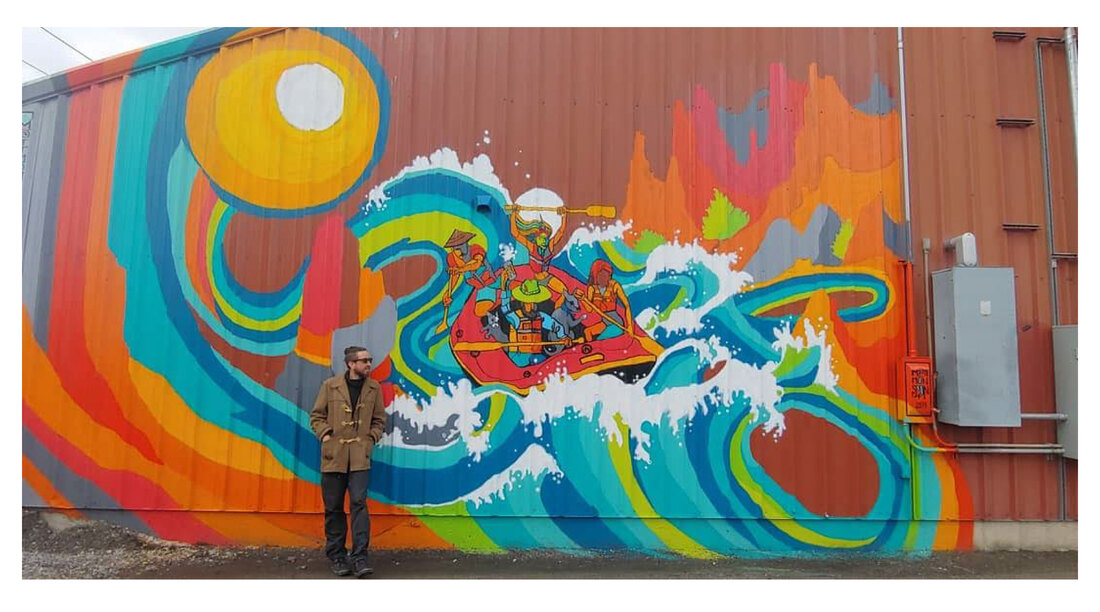 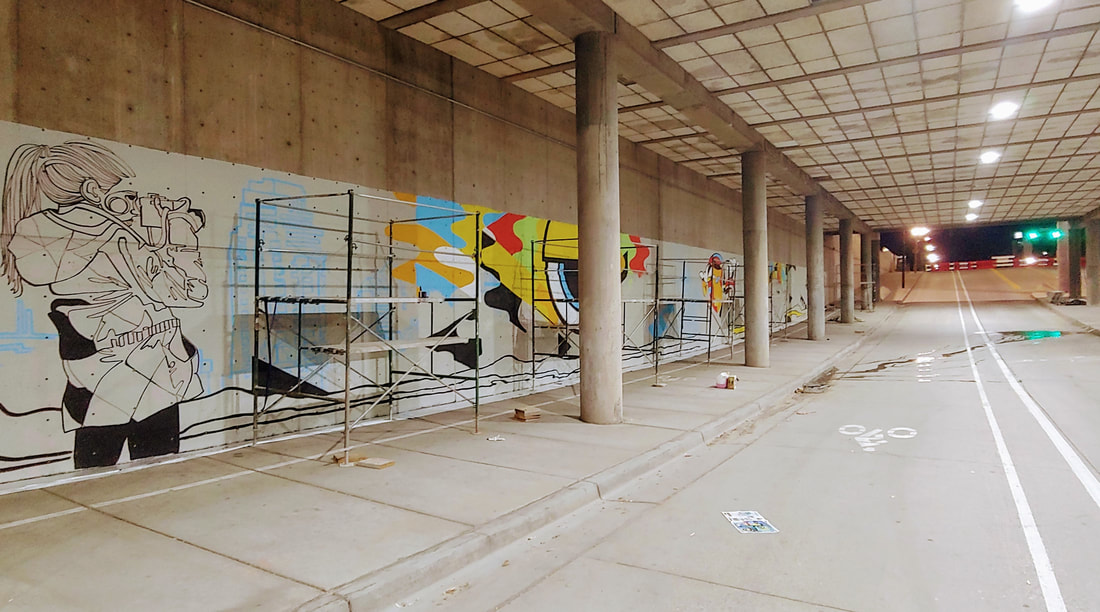 The Salt Palace Subway : A long-time favorite for bicyclists and skaters - the Salt Palace Subway just needed a little art and color to bring it to full life. Alongside a team of 5 other SLC artists, Matt helped draft and design this 300' mural as part of The Blocks SLC inaugural kick off in 2018. The project was completed start to finish in just two weeks from time of notification to the interactive community 'paint by numbers' festival to help us finish the work off.
300 x 14 feet | The Salt Palace, SLC - (200 West between 1st South and South Temple) 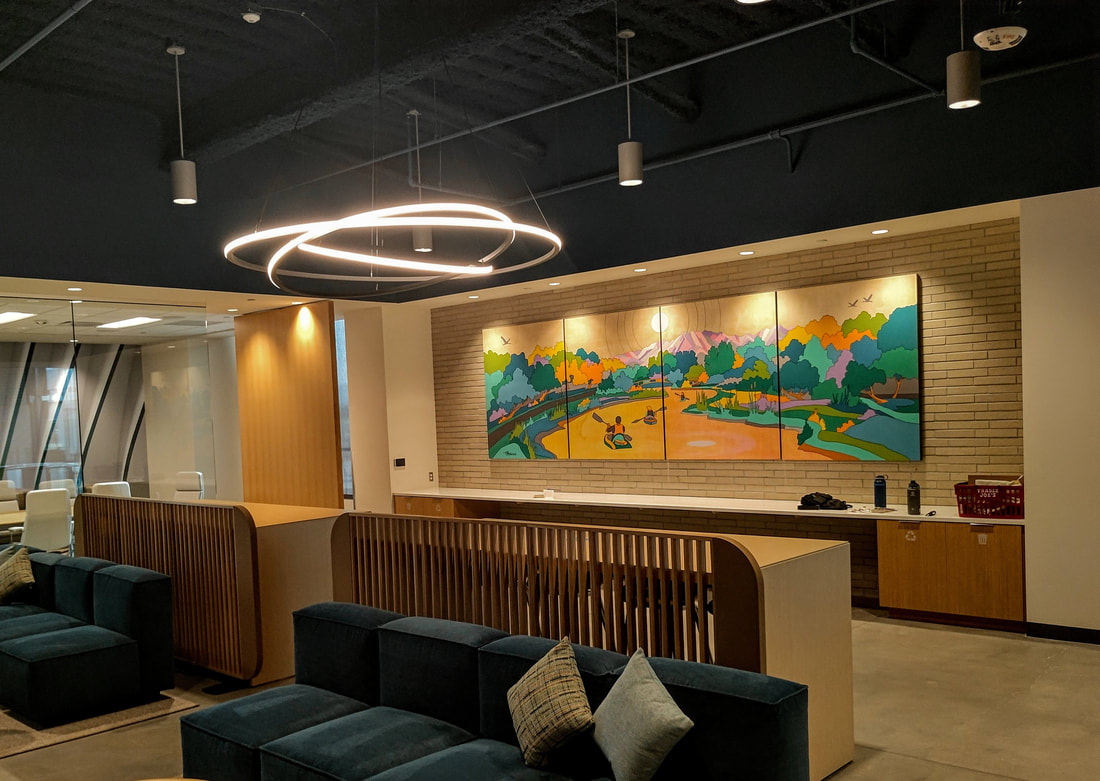 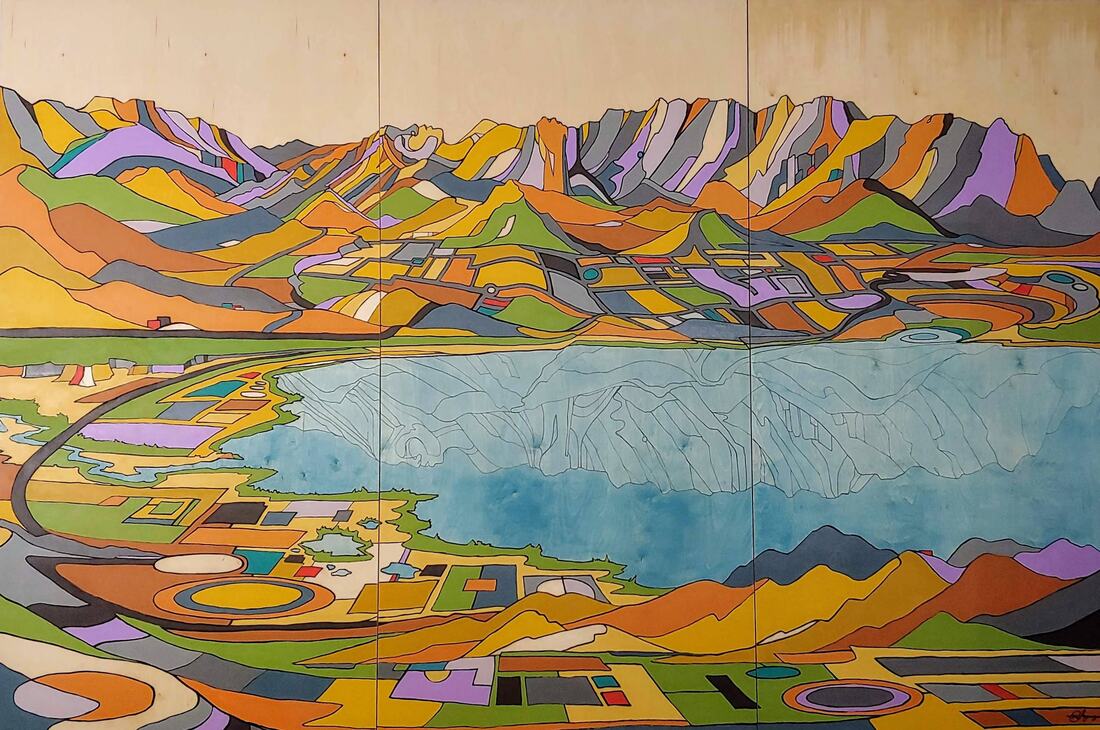 The dramatic beauty and staggering backdrop of Mount Timpanogos has long inspired awe, the call for pilgrimage, and served as the centerpiece of folk tales and legends. There are at least 12 recorded versions of the Legend of Timpanogos - some dating back to indigenous culture - and several modern adaptations since that time.

Long before the ‘Silicon Slopes’ and the modern towns of this area were developed - the mountains and valleys of this region were home to many native people. According to variations of the legend - there was a young brave from the Nez Perce tribe to the North, named Timpanac, or Red Eagle, who was the chief’s son. Each year, Red Eagle would accompany his father to the white peaks of the sacred mountains where the chief would pray on behalf of his people to the Great Spirit. One year, there was no snow or rain, and Red Eagle’s father had fallen ill - so it was on the young brave to make the journey alone.

While praying, Red Eagle was told to go far to the South where he would meet a tribe that would bring assistance. It was there that Red Eagle met the Uinta-Timpanogots people, and the beautiful daughter of the chief, named Ucanogos, or Utahna. The two were instantly fascinated with each other and soon fell in love.

Utahna’s father soon decided it was time for Utahna to marry - but, honoring tradition - he sent word to eligible suitors from tribes around the entire region, calling them to competition for a chance to marry his daughter. A date was set - and many braves from the desert to the mountains gathered in this valley for a chance to marry the beautiful Utahna.

There were to be three competitions : an endurance race, hunting without weapons, and climbing the peak of Mount Timpanogos. Red Eagle finished the endurance race, and with the assistance of the tribe, brought back a bison he had hunted without weapons. The final test, however, looked to be Red Eagle’s greatest strength - given his adept skills from years of climbing the sacred mountains with his father. This made Utahna’s heart happy - but she spent the night sleepless with worry.

In the morning - the race to climb the peak of Mount Timpanogos began - as the remaining braves in competition hurried up the slopes. Red Eagle quickly outdistanced the slower climbers - but, as he approached the peak, he was ambushed by jealous braves that had been disqualified from competition, and they pushed him from the craggy cliffs to his death, a thousand feet below.

Utahna - upon hearing the news - climbed the steep slopes of Timpanogos until she reached the peak, where Red Eagle was pushed. Seeing his broken body in the crags below - she wept a million tears upon him, becoming the beautiful Emerald Lake below. And with that - Utahna laid down on the mountaintop, and became the mountain itself.  If you look closely - people say you can still see the image of Utahna in Mount Timpanogos today.

My piece is called ‘While Utahna Sleeps’ because, much like the legend - Utahna is not dead. Rather, I like to think she’s sleeping, dreaming, watching over us, and the steady march of time from millennia to millennia - lying in wait for her time to come again. To me - she acts as a symbol of undying love, a guardian, and a reminder of the immense natural beauty of this region - and our responsibility for it. She asks for respect, appreciation of all those we share this land with, and to make a commitment to take the greatest care of the mountains, air, waters, and valleys she entrusted us with. 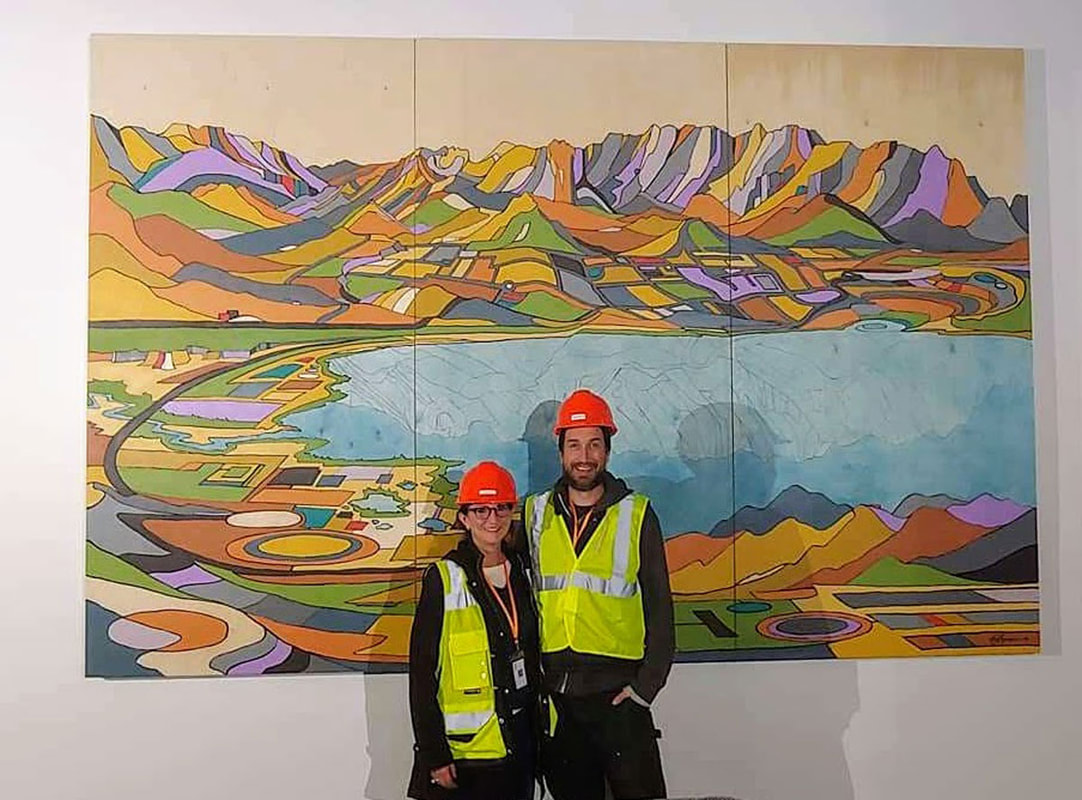